The estate of Abramtsevo became famous as the centre of artistic community gatherings, that developed in the mid-1870s around the industrialist Mamontov. A well-known philanthropist, an artistically gifted person, his estate became the centre of Russian culture for a quarter of a century.

Artists would settle here for the whole summer, enjoying the peace, quiet and ambiance. Repin andVasnetsov, Serov and Vrubel, whose works are displayed at the Tretiakov Gallery were all frequentguests to the estate.

Abramtsevo was the cradle of «Neo-Russian style»  (Art Nouveau in Russia).

The artistic community in Abramtsevo also created carpentry and ceramic workshops. They collected peasant art from across Russia, using them as inspirations for their own works with the goal of reviving the popularity of the beautiful handicraft. The Abramtsevo community believed although something was a work of beauty, it should be practical. Then beautiful things could be used in everyday life. The group’s intention was to return to decorative and applied art in its poetic essence, as well as its main function, to adorn peoples’ everyday lives. Obviously, every artist understood and saw these goals in their own way, making their unique contribution to Abramtsevo artistic phenomenon.

Prior to Mamontov, the estate was owned by the writer Aksakov. He also used to attract many outstanding individuals, including the iconic authors such as Turgenev, Zagoskin, Gogol, the poet Tyutchev, actor Shchepkin and world-known opera singer Shalyapin.

After the revolution the estate was nationalized and turned into a museum and park, containing architectural monuments from the 18 th and 19 th centuries. 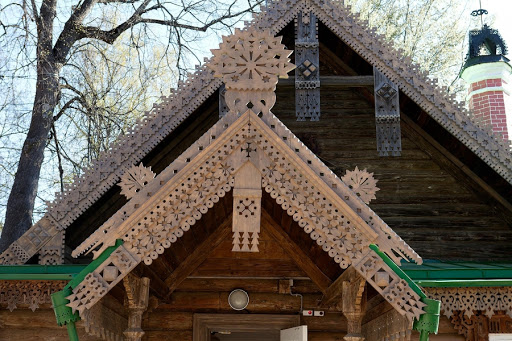