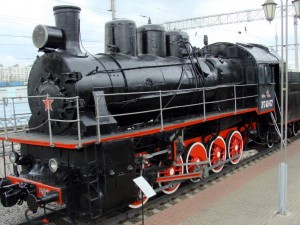 extraordinary  place. All the machinery is well-maintained, with many Engines still in working condition. Some of these locomotives were kept in the War Reserve until 1991; after which in 2004 they were donated to the museum.

The visit to the exhibition is educational. For example, every type of train has its nicknames, just like people. Cargo trains used to be painted black while passenger trains were painted blue. It is interesting to learn how a “normal” wagon was defined. A normal wagon would accommodate 40 people or 8 horses. Comfortable travel!

Before the brake mechanism was invented this function was fulfilled by a person. They called him “dogger” (that’s my free translation in English”- a word that in Russian derived from the word “Dog”. This was because he had to carry 3 lanterns for the train plus one other lantern. At this point he’d “run out of hands” to carry staff, so he’d put a rope on his arm and dragged the other items he had to carry attached to this rope. This looked like a dog on the chain, hence “Dogger”.