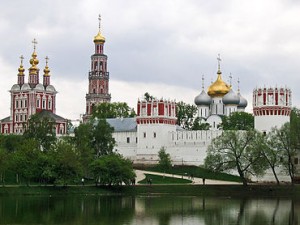 The marority of old Russian churches were built to commemorate military victories. Novodevichy Convent was no exception. Founded in 1524 to commemorate the recapture of the ancient city of Smolensk from Lithuania, it is one of the top tourist attractions in Moscow and is on the UNESCO list of World’s Heritage.

As important to Russian culture as it is, Novodevichy Convent is only part of the story/ Novodevichy Cemetery is no less remarkable. The Cemetery has as much history and as many visitors as the Convent itself.

Novodevichy Cemetery is divided in two: old and new. The older is around the Smolensk Cathedral, originally used as a burial ground for Russian aristocratic ladies. The name speaks for itself. Novo meaning “new” and devichy  “girls’”.  The second part dates from 1900. In Soviet times the honour of burial here was second only to burial within the Kremlin. Since the collapse of the USSR the Kremlin is no longer used as a cemetery. Nowadays this is the resting place of Russian political, military and cultural elite. Novodevichy makes death fashionable.

When: We meet at 14h at Sportivnaya metro station.