19 October Museum of Heroes of the Soviet Union

This is one of Moscow’s newest museums, created in 2006 to commemorate the heroes of all the Soviet Republics and Russia (after the collapse of the Soviet Union). 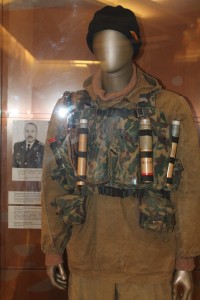 This is a place where visitors can learn about numerous acts of bravery and self-sacrifice for the sake of the others.

In the museum’s archives one can learn about the destiny of every single Hero, whether it was a War Hero, or a Hero of Socialist Labour.

Some of the situations are controversial as the first award, branded as «Hero of the Soviet Union»  was given to Stalin…

The award was established in 1934. On display are pictures and documents, equipment, uniforms and personal effects, webbing and weapons. A lot of the information was provided by the relatives or the comrades-in-arms of the Heroes.

When: we meet at 15h outside metro Akademicheskaya