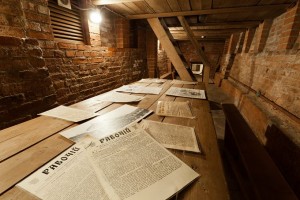 This is one of the most unusual museums of Moscow. During the First Russian revolution they produced illegal handouts and a social-democratic newspaper.

The museum shows the living quarters of Russian revolutionaries, it explains their psychology and motivations. One can also learn about Tsar’s secret police and how they fought the revolution. The illegal printing works were never discovered by Tsar’s secret agents due to strict secrecy amongst the conspirators and the local underground workers’ professionalism and commitment to the Revolution.

When: We meet at 14.45h at the exit from Belorusskaya Metro Station. Please take the exit towards Lesnaya street