Nizhny Novgorod is a city where I studied at the University 🙂 The city is situated on the confluence of 2 great Russian rivers, Oka and Volga.

A truly old, beautiful and historical Russian city, worthwhile spending a weekend at 😉

Nizhny is known for many different things and various crafts is not the least, so we will start our day with a pottery master-class. I will stay in Nizhny several days longer, so I will be able to bring your master-pieces back into Moscow when they are ready & burned in the special oven. 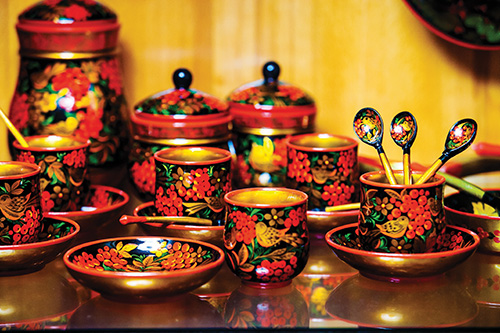 We then will visit Crafs of Nizny Novgorod Museum, expanding our knowledge about local artictic directions. Some of the local produce is famous across Russia. For exapmple the art of «khokhloma» is probably as known in Russia as Matreshkas (Russian dolls)  So, if all your friends and relatives already own Mtreshkas you brought them as souvenirs you should probably give them «khokhloma» next 🙂

And some artisanal woodwork, from truly skilled & talanted people. 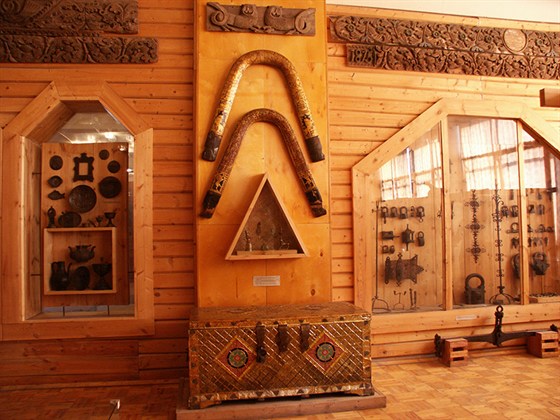 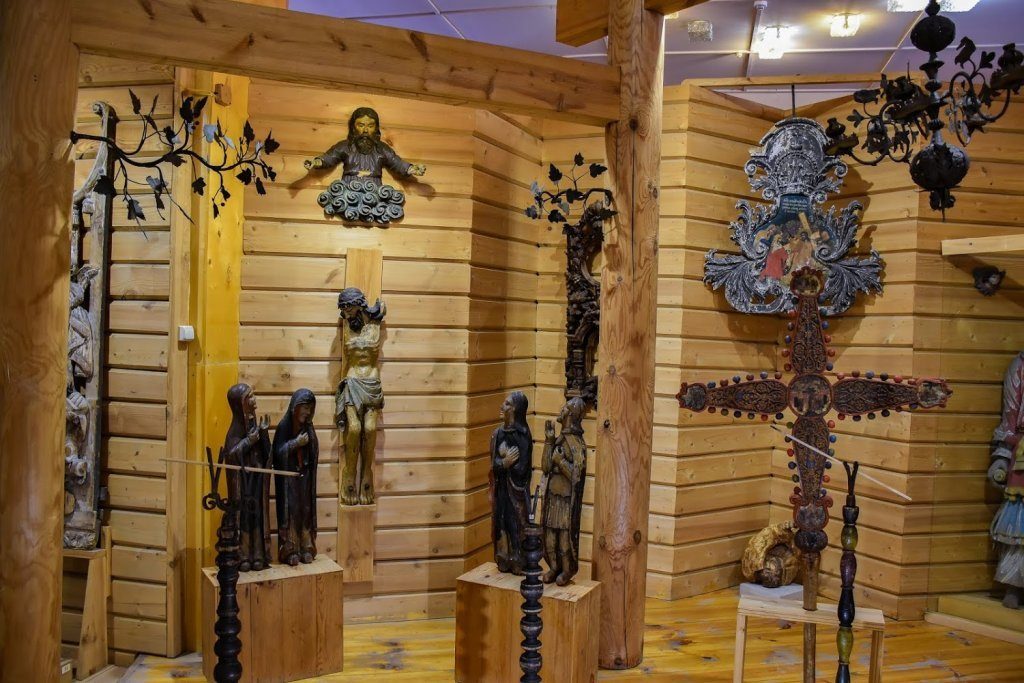 Now we have already seen and done a lot, so it’s time for lunch break.

After we replenished our forces we will only have to make a couple of steps to see another very special museum, devoted to various old and unusaul technical devices 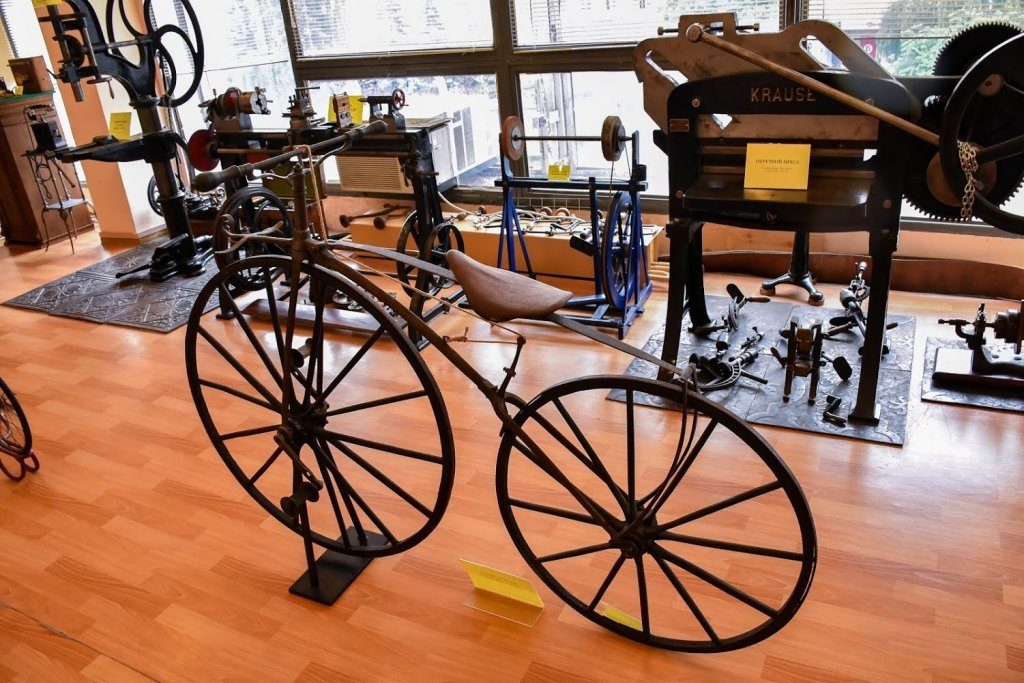 The exposition covers various topics, from wheels & bikes to the first steps in space exploration 🙂 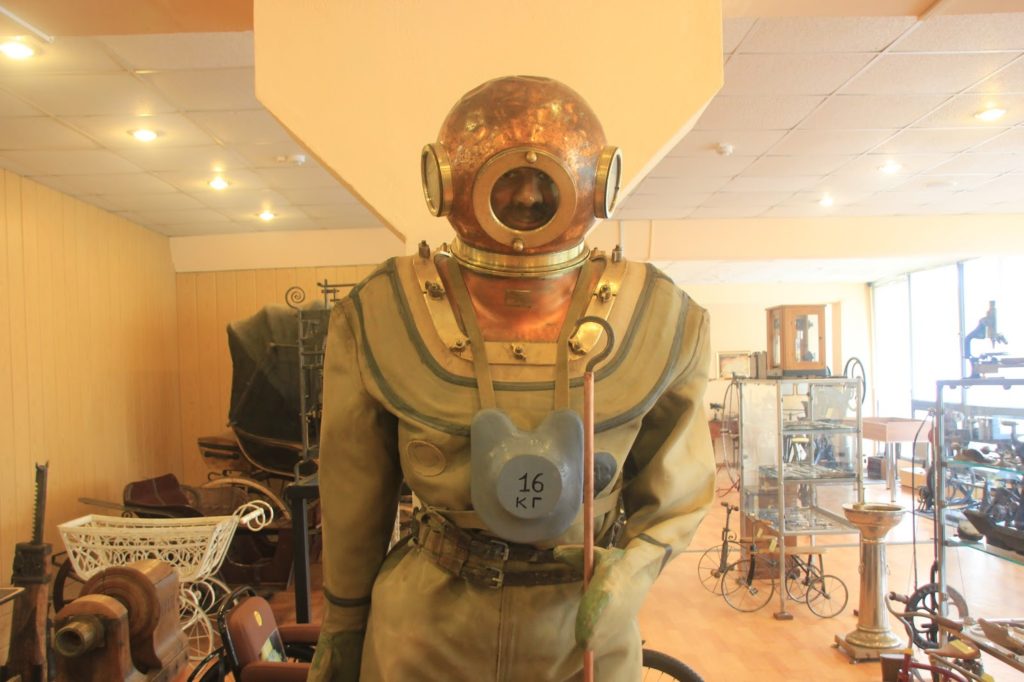 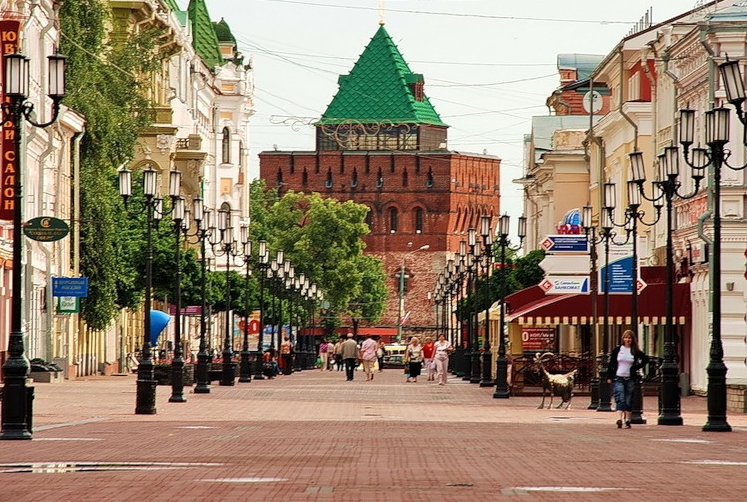 It leads us to the Kremlin walls

Chkalovskaya Stairs has several observation platforms and allows magnificient view over the river. 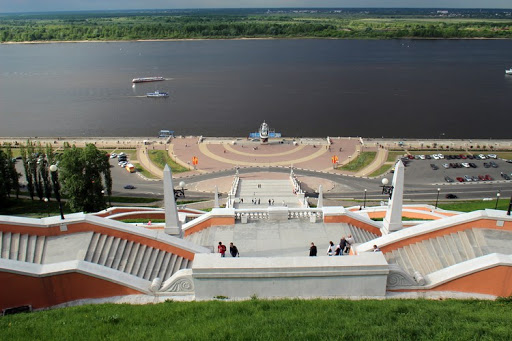 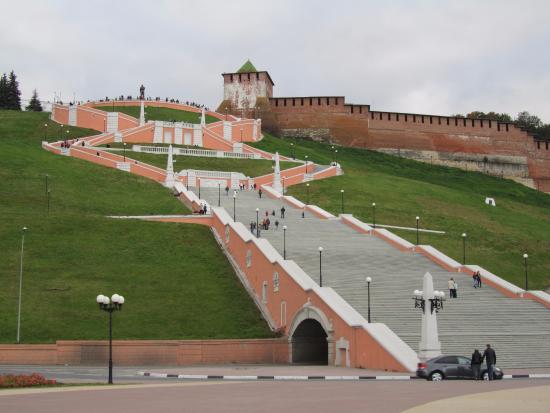 In the evening, especially in summer, people come to the embankment to ride bikes and enjoy the ambiance. 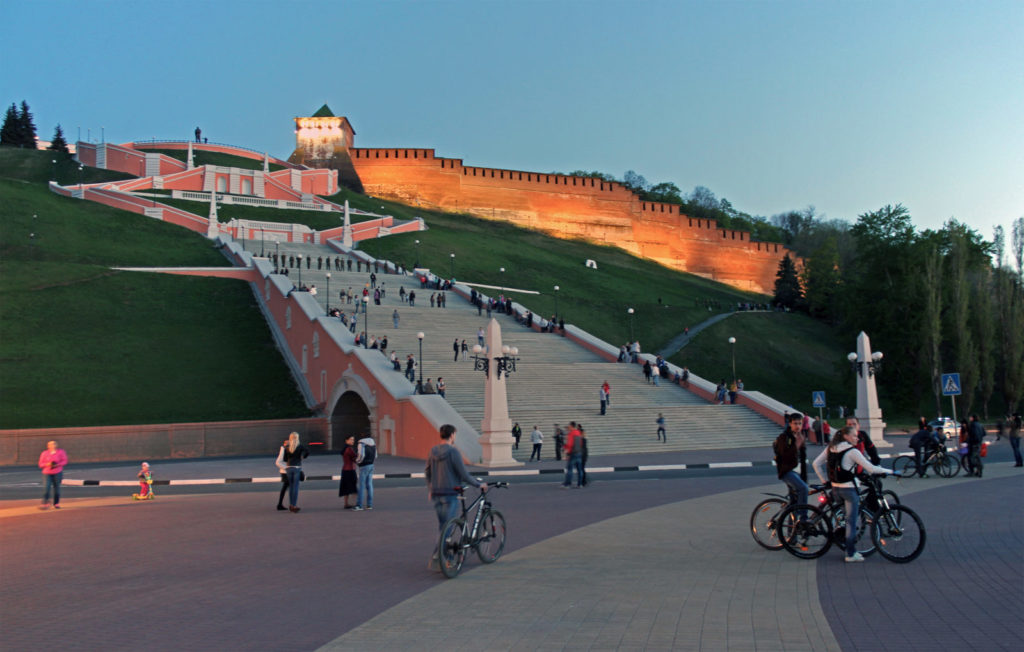 Dinner time, at one of the good and currently popular places 🙂

In the Soviet times names of many cities in Russia were changed. You probably know that St Petersburg used to be called Leningrad. It is true for Nizhny Novgorod as well. Its name was changed to Gorky, after a famous writer.

As the Soviet period is an important part of Russian history, I think we have to see the Museum devoted to this writer. Its a place that became a prototype for the book «Childhood». All Russian people know Gorky and have to read his books at school. Its an old and quite typical for the time wooden house, where they preserved all the household so you can undrestand how people used to live then (before the Soviets as well) 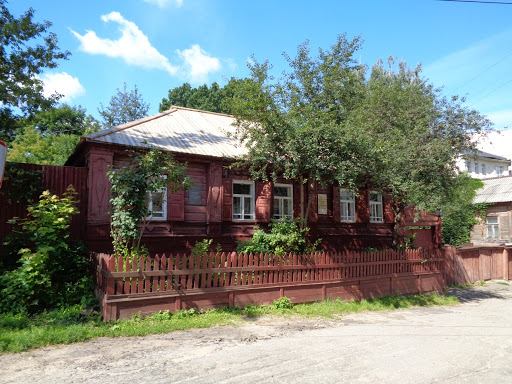 We will then walk along Fedorovskogo embankment and come to the second most beautiful and historical street of Nizhny Novgorod, Rozdestvenskaya 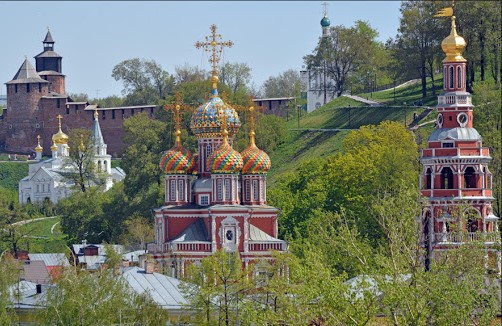 We will have lunch at a place that makes you feel you are invited to a traditional merchant house; the restaurant uses old Russian recipes as in pre-revolutionary Russia. 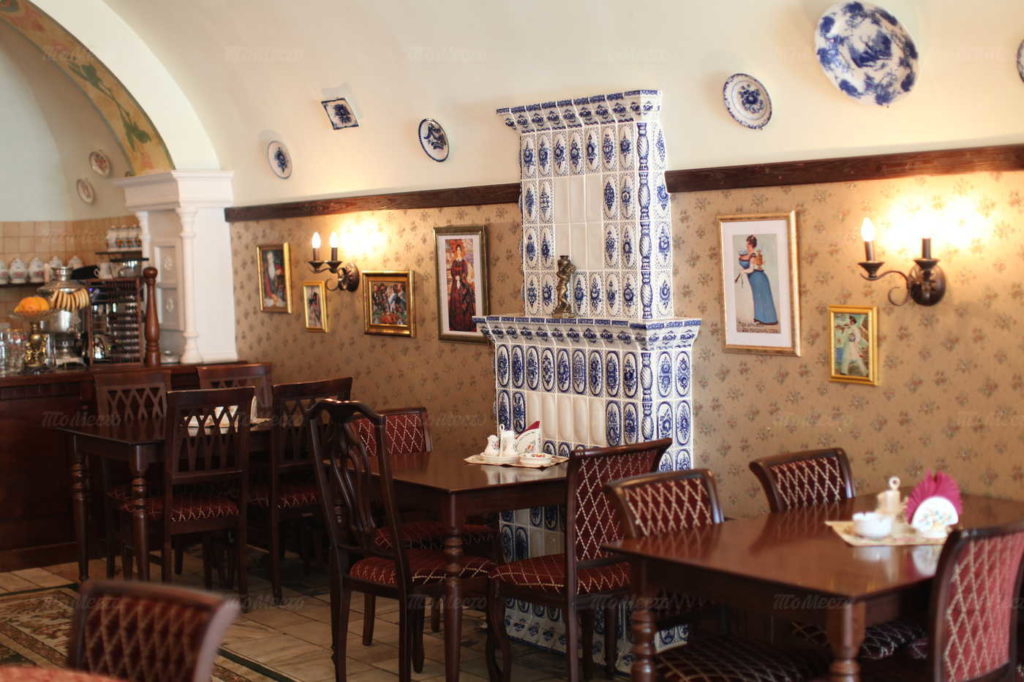 We will then see a momument to Minin & Pozharsky. Does it seem somehow familiar? You are right! You have seen this monument on the Red Square in Moscow! There is a copy in Nizhny. Can you guess why? 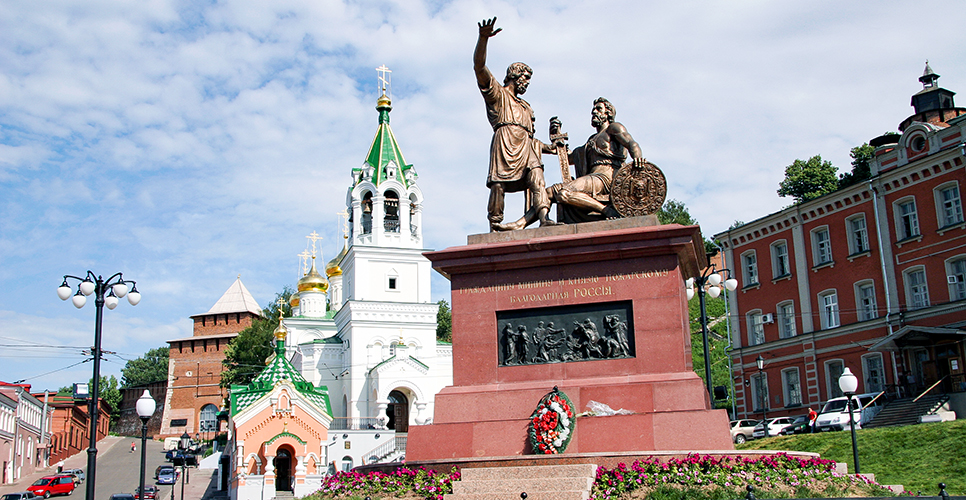 As we touched the topic of Nizhny history prior to the Revolution, we will also visit one of the most beautiful estates of the time. Being situated on the confluence of Oka & Volga rivers, Nizhny Novgorod was a merchant city. Rukavishnikov who build his house (palace) in 1877, was a merchant-millionaire.

I tried to make the program varied, covering many topics and time periods so that you get a good undertanding of what the life used to be in this area of Russia for people coming from different backgrounds. I hope you enjoy! 🙂

A quick train departing at 18h brings you back into Moscow at 22h.