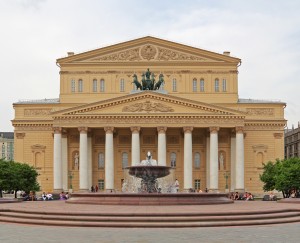 The company was founded in 1776 by Prince Peter  Urusov and Michael Maddox. Initially, it held performances in a private home, but in 1780, it acquired the Petrovka Theatre and began producing plays and opera. The current building was built on Theatre Square in 1824 to replace the Petrovka Theatre, which had been destroyed by fire in 1805. It was designed by architect Andrei Mikhailov, who had built the nearby Maly Theatre in 1824.At that time all Russian theatres were Imperial property. Moscow and St Petersburg each had only two theatres, one intended for opera and ballet (these were known as the Bolshoi Theatres), and one for plays (tragedies and comedies).The Bolshoi Theatre’s original name was the Imperial Bolshoi Theatre of Moscow, while the St. Petersburg Bolshoi Theatre (demolished in 1886), was called the Imperial Bolshoi Komenny Theatre. The Moscow theatre was inaugurated on 18 January 1825 Initially, it presented only Russian works, but foreign composers entered the repertoire starting around 1840. A fire in 1853 caused extensive damage; reconstruction was carried out by Alberto Cavos son of Catterino Cavos, an opera composer. The theatre reopened in 1856. During World War II, the theatre was damaged by a bomb, but it was promptly repaired. A major restoration project was completed recently now and the Theatre reopened to the public in 2011  The Bolshoi has been the site of many historic premieres including Tchaikovsky’s “The Voyevoda” and “Mazappa” and Rachmaninoff’s “Aleko” and “Francseca da Rimini”

When: we meet at 10.45h in front of the main entrance to the Bolshoi Theatre