Ostankino TV tower was completed in 1967, marking the 50th anniversary of 1917 Bolshevik 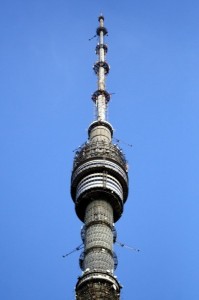 Revolution. The project was developed by an outstanding Soviet architect and engineer N.V. Nikitin. The legend is that Nikitin came up with his design overnight, taking an upside-down lily as his inspiration . The Tower’s height is 540,1 meters high with a floor area of 15,000 m2. On completion the tower was the world’s tallest free-standing structure only surpassed in 1976 by Toronto CNN Tower.

The necessity of constructing of such a tall antenna building in Moscow was explained by the booming growth of television and radio broadcasting in the USSR in the late 1950’s.

When: 11.40 h meeting at the exit from VDNK metro sation