This is the only time a year one can visit Moscow State University on a week end. 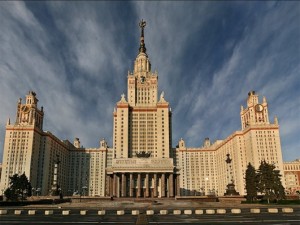 central building of Moscow State University (MGU) is one of Stalin’s Seven Sisters, the supersized buildings erected on the instructions of the dictator and built between 1947 and 1953. Muscovites refer to the buildings as “Stalinist Skyscrapers” or vysotki.

The decision to build the Seven Sisters was political, with priority given to the project, rather than to address the terrible housing shortage following the 1941-1945   War. Stalin said «We won the war … foreigners will come to Moscow, walk around, and there’s no skyscrapers. If they compare Moscow to capitalist cities, it’s a moral blow to us.«

When: we meet at 10.30 h outside the metro Universitet