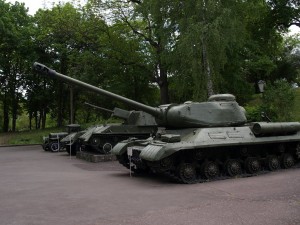 Have you ever been to Victory Park? If yes, are you sure you have seen everything that is worth seeing? An open-air exhibition of military machinery, open in the beautiful park just behind The Second World War Museum. Russian, British, American, German planes, cars, tanks, helicopters, railroad equipment are displayed. You will also be able to see Soviet soldiers living conditions in the Great Patriotic War.

We will visit the II World Wra Museum and learn about the major battles on the Eastern front. Soviet Union lost 26 million people in that war…

When: We meet at Park Pobedi metro station at 9.45 h