Upper Petrov Monastery is one of the main holy relics of Moscow. The monastery was founded by Saint Peter in the beginning of the 14th century and is situated in the very center of the capital. Russian Prince Ivan Kalita often asked Saint Peter to advise him on the important state business, and finally invited him to settle in Moscow. The priest found it inappropriate to live in a palace and asked the prince to build a monastery which would allow him to continue leading his saint life and at the same time stay in close proximity to the ruling prince. 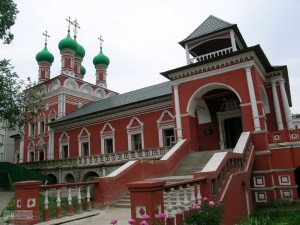 In the Soviet times the majority of the churches of the monastery were officially closed
down. However, the conventual community continued to function according to the monastery rules. Working in Soviet institutions was counted as an ordeal, as an act of heroic religious bravery. Serving as a priest was dangerous for one’s live, but many men continued to do so. The majority of them very either killed or sent to Gulag’s… The site re-opened as a monastery in 2009.