The Museum was opened in 1920 on the territory of a former New Jerusalem monastery. The monastery was founded in 1656 by Patriarch Nickon, who wanted to re-create Palestinian holy places around Moscow. Nickon played a dramatic role in Russian religious history. His ambition to modify Russian Orthodox religious services in accordance with the Greek Orthodox Church caused a great deal of animosity and hatred amongst Russian people. For example, he wanted people to make a sign of the cross with 3 fingers (prior to his decision church-goers used to do it with 2 fingers). People who accepted the new practice were left in peace. However, a schism in the Church followed; people decided to follow the old practice. They are known in Russian history as the «old-style believers». Prosecuted by the state and church, many hid deep in Russia’s forests and continued their lives, isolated from any contact with the state, the official church and other Russian citizens.

*The monastery is outside of Moscow.

The cost is 4500 rub per person. Transportation is provided and included in the price. 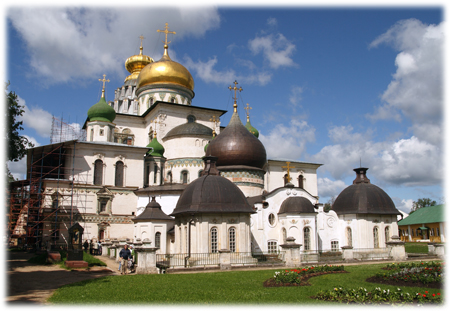