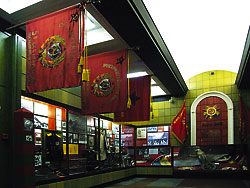 The museum was founded in 1914 in St Petersburg and was transferred to Moscow in 1932. The museum aims to explain people about the border guard service. You will learn how the territory of the Russian Federation changed in time and how our borders were formed. Different conceptions of border guarding prevailed in different times.

The Museum exhibition covers the period of history from Olden Russia, till the Second World War, the war in Afghanistan and to present day Russia. The history of border guarding is directly linked to the history of Russia itself.

When: we meet at 12.45h outside Kitai-Gorod metro station